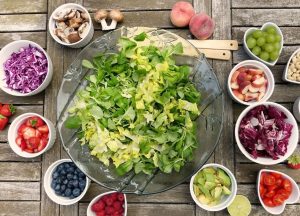 In 1989 psychologist and gerontologist, Ken Dychtwald, explained his fifteen years of research on the aging of the baby boom generation, in his best-selling book, Age Wave. He predicted the record number of people approaching retirement simultaneously would change society and challenge myths about what it means to age as well as the quality of life boomers might expect.

Coming out of the 1960’s a resurgence in the “Green Pharmacy” of natural medicine emerged which found legitimacy in research on natural compounds such as Vitamin C by two-time Nobel Prize winner, Linus Pauling.

In 1971 Pauling published, Vitamin C for the Common Cold, and formulated the theory of “Orthomolecular” medicine. Using natural remedies to aid in health and longevity appealed to the baby boomers at a time when the youth movement warned not to trust anyone over thirty!

In 1978 the United States Department of Agriculture (USDA) released their first publication on Food and Cancer. I recall reading the pages printed by a dot-matrix printer and was astounded to read their conclusion: They found direct link between a specific food and cancer, but they did observe that individuals who ate less had less cancer!

In 1995 the USDA published, The American Diet Health and Economic Consequences by Elizabeth Frazao. The premise for the research in the book was, “Poor diets are associated with 4, including the top 3, of the leading causes of death in the United States: heart disease, cancer, stroke, and diabetes. Poor diets are also associated with other health conditions that contribute to premature mortality or reduced quality of life and productivity.”

While studying chemistry and nutrition at U of L, I found Food is Your Best Medicine by Henry G. Bieler, MD which advocated the treatment of disease with foods. He is widely recognized as a pioneer in alternative medicine who used non-pharmaceutical, diet-based therapies to treat his patients. Bieler opposed the use of any drugs, including aspirin. He rejected the germ theory of disease and his ideas were rejected by medical experts as quackery!

Nearly 50 years later the “age wave” has manifested but where are we in terms of “anti-aging”? In 1971 the life expectancy at birth for a woman was 75 years and for a man, 67.4 years. In 2019, in North America, the male is expected to live to be 80 and the female to 84. Advances to be sure, but what degree of credit can we attribute to any promotion in exercise, diet, or any other component within the anti-aging movement? Would life expectancy have grown by thirteen years for a male over the last 50 years if joint replacements, cardiovascular stents and insulin pumps didn’t exist?

Well, imagine how health care cost could come down if people paid more attention to their health, specifically their diet, More specifically, to the anti-inflammatory items in their diet? Where is the outcry for healthier people and not cheaper care? We don’t hav’ a healthcare crisis in America we have a health crisis. Baby boomers can make health care affordable by needing it less!

For years I have purported, but never published, exploring the revenue the US government might raise to help fund Medicare and Medicaid by taxing High Fructose Corn Syrup (HFCS) and refined sugars and artificial sweeteners like the Federal Excise Taxes placed on Alcohol. Distilled spirits have an excise tax rate of $13.50 per proof gallon, which works out to $2.14 for a 750-milliliter bottle of 80-proof alcohol. Given that the majority of HFCS is manufactured by Cargill Inc., Archer Daniels Midland Company and Tate & Lyle PLC might the collection of an excise tax be fairly straight forward? Then, if you purchase product which include HFCS or sugar, the price you paid for the Twinkie includes the cost for your future health care. This way individual companies or products are not singled out while others are not. I’m interested in hearing your thoughts on this idea.

Meanwhile, chronic low-grade inflammation threatens everyone on the planet today. Many baby boomers may need joints replaces and stents put in, but they can also eat their way to a pain free life!

Start with these three simple suggestions:

I realize the food chain has changed and preparing meals takes effort, but never before has good, prepared, food been more readily available. Look at food as an investment, not an expense. If you are interested in the topic, look for a used copy of Dr. Bieler’s book. Please, be an asset to the health care system and not a liability! Take good care of your body. If not, where else are you going to live?